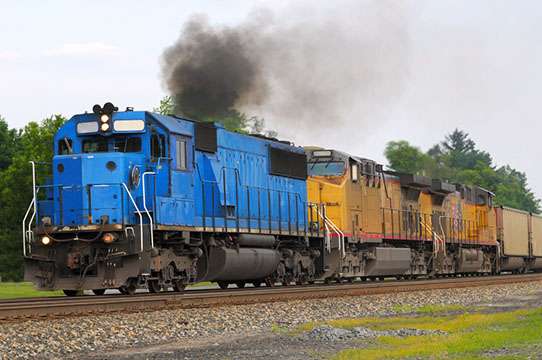 What is diesel exhaust?

Diesel exhaust is a complex mixture of hundreds of hazardous particles and vapors emitted from diesel engines. Diesel exhaust contains a number of known human carcinogens, including benzene and various hydrocarbons. Other harmful substances such as arsenic, carbon monoxide, and formaldehyde are also contained in diesel exhaust.

What are recognized health effects of diesel exhaust exposure?

How are railroaders exposed to diesel exhaust?

The railroads have known for years that diesel exhaust could be harmful to its workers. We have obtained minutes of the meetings of the American Association of Railroads dating back as far as the 1960's reflecting the railroad industry’s knowledge that exposure to diesel exhaust could injure railroaders. As concern over the health effects of diesel exhaust exposure mounted, the Federal Railroad Administration has at least taken some action. It authored several federal regulations to protect railroaders from diesel exhaust, among them the requirement that products of combustion, including diesel exhaust, be released entirely outside of the locomotive cabs. Unfortunately, these regulations are frequently ignored by railroads. Proper inspection and maintenance of locomotives takes time in a locomotive shop. When the engine is in the shop, the wheels are not running and revenue is not being generated. Sadly, this can result in the railroad industry’s most valuable asset, its workers, being exposed to harmful diesel exhaust and being injured as a result.